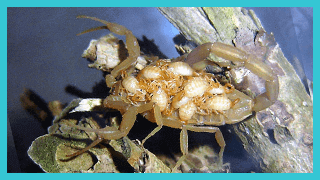 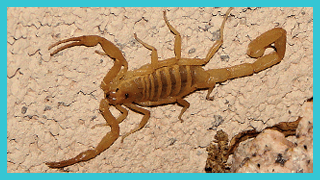 Description:
2-2 3/4″ (50-70 mm). Dark brown to tan, often striped with greenish yellow along midline above. Some individuals have greenish-yellow parallel stripe on each side of cephalothorax. Abdomen slender, constricted at each segment, pale or dark according to locality. Tooth at base of the stinger.

Life Cycle:
Male uses pincers to pull female over packet of sperm he has placed on the ground. Female gives birth to live young, then carries hatchlings on back until they can fend for themselves.

Habitat:
Dark crevices under bark, stones, and litter on the ground, and on dry abandoned dirt roads.

Discussion:
These scorpions seize prey in pincer-tipped pedipalps and kill them with their stingers. This species is also sometimes called the Sculptured Centroides (C. sculpturatus).

WARNING: The most dangerous scorpion of the Southwest. It’s sting is extremely poisonous and sometimes life-threatening, especially to small children and the elderly.