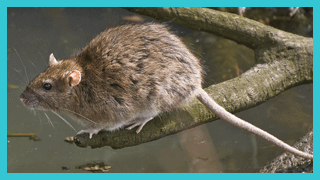 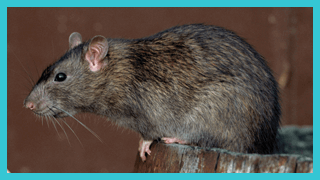 Breeding:
Breeds year-round; like other rodents, sometimes mates within hours of giving birth; gestation 21–26 days; female may bear up to 12 litters per year of 2–22 young (usually about 5 litters of 7–11 young). Young born hairless and blind; open eyes at 2 weeks; are weaned at 3–4 weeks.

Discussion:
While early scientific descriptions of this species came from Norway, and it was once believed to have arrived in England in the 18th century aboard Norwegian ships, the Norway Rat is neither a native of Norway nor more common there than elsewhere. Probably originating in Central Asia, from the 16th to the 18th century it spread across Europe both overland and aboard trading vessels; it arrived in North America about 1776 in boxes of grain brought by the Hessian troops hired by Britain to fight the American colonists. The Norway Rat makes a network of interconnecting tunnels 2 to 3 inches (50–75 mm) across, up to 1 1/2 feet (450 mm) deep, and 6 feet (2 m) long. Such a network contains one or more chambers for nesting or feeding, one or more main entrances, and several escape exits. This rat digs by cutting roots with its incisors, freeing dirt, pushing it under its body with its forefeet and out behind with its hindfeet, then turning around and continuing to push the dirt out with its head and forefeet. Its vocalizations include squeaks, whistles, and chirps. This loosely colonial rat is a good climber and swimmer. Omnivorous, it feeds on meat, insects, wild plants, seeds, and stored grain, contaminating with its droppings what it does not eat. It will kill chickens and eat their eggs. Food shortages and unfavorable climates sometimes limit this rat’s reproductive potential, resulting in fewer and smaller litters. When food is abundant, females may produce a dozen litters in a year. At two years, females stop breeding and males’ reproductive powers diminish. Snakes, owls, hawks, skunks, weasels, Minks, and dogs are predators. The life span is about three years, but few Norway Rats live that long. If local populations become severely overcrowded, mass migrations may occur. In 1727, hordes of Norway Rats were observed crossing the Volga River in Russia; though millions drowned, many survived. The German nursery legend about the Pied Piper of Hamelin, who rid the town of rats by musically charming them into the Weser River, where they drowned, probably grew from observations of rat migrations. Rats are a major carrier of diseases such as typhus, spotted fever, tularemia, and bubonic plague, and their destructive powers are enormous. As well as eating grain and ruining property, rats have started fires by gnawing matches and caused floods by tunneling through dams. The white rats used in laboratories are specially bred albino strains of the Norway Rat.