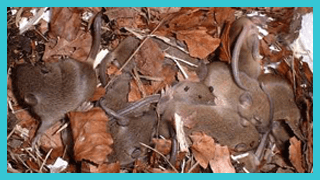 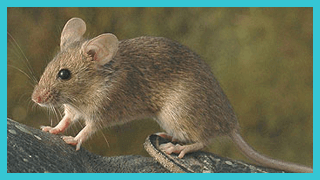 Breeding:
Gestation 18–21 days; several litters per year, each of 3–16 young; reproduces spring through fall in North, year-round in South.

Range:
Pacific Coast south from Alaska through w and s Canada and throughout all of continental U.S.

Discussion:
The House Mouse originated in Asia and spread throughout Europe many centuries ago. In the early 16th century, it arrived in Florida and Latin America on ships of the Spanish explorers and conquistadores, and about a century later came to the northern shores of North America along with English and French explorers, traders, and colonists. The House Mouse makes its own nest but lives in groups, sharing escape holes and common areas for eating, urinating, and defecating. It takes turns grooming its fellows, especially on the head and back, where it is difficult for the animal to groom itself. If the population grows too dense, many females, particularly adolescents, become infertile. A highly migratory existence and rapid rate of reproduction enable the House Mouse to thrive; it takes advantage of situations not readily available to other species, including cultivated fields, which offer a rich if temporary habitat. As a crop develops, the mice move in and have several litters in quick succession, building large populations quickly; when the field is harvested or plowed, they move out. Many perish, many find other fields, and still others invade buildings. Sometimes these migrations assume plague proportions: In 1926–1927, an estimated 82,000 mice per acre (202,000 per ha) wreaked havoc in the Central Valley of California. In such densities, House Mice, though generally timid, have been known to run over people’s feet and even to bite. In cultivated fields, some of their actions are beneficial, as they feed heavily on weed seeds, with foxtail grass a favorite, along with caterpillars and other insects; in houses, barns, and storage buildings, they are entirely destructive. These mice eat or their droppings contaminate large quantities of grain and other valuable foodstuffs. Their scientific name derives from the Sanskrit musha, meaning “thief.” They chew or shred anything chewable or shreddable, including furniture and wires, and sometimes start fires. They can scurry up rough vertical walls and even pipes; they gnaw holes in walls, floors, and baseboards. Like Black and Norway rats, House Mice can spread disease. In the wild, birds and mammals are predators. Centuries ago, cooked mouse meat was a folk remedy for colds, coughs, fits, and fevers, but it is not recommended today. The white mice used in research laboratories are albinos bred from this species.